China’s game plan to become global superpower hastily costing heavily to the whole world especially developing nations. China is using vilest tactics to expand its territory, capturing global market with debt trap policy, using naxalism and terrorism to create unrest in countries that it perceives as challenge, then Biological War, human rights violation and so on.

What strategies are being adopted by China to grab control over resources, market of majority of countries and making them “Economic Slaves”. What fear made majority of nations not to speak against Wuhan Corona Virus? How many Muslim countries are vocal about the atrocities done to Uhgir Muslims by Chinese government?

Debt trap policy concocted with intends to get benefited on three fronts:

3. Military base at strategic locations

Let me put some stories which highlights how china is misusing its money and muscle power,

A recent study by international agency about the 100 contracts signed with the 24 countries clearly showed that the purpose is to lend heavy loans with lower interest rates, which cannot be paid back by the countries. Then take control of their resources, market, infrastructure and strategic locations to build Military bases to counter nations not supportive of their ideology of opportunism, expansionist attitude and deceitful economic super power dream.

Tajakistan: Debt trap country, China has grabbed territory of 1158 sq. km. and digging out natural resources like minerals, gold, silver and empowering itself.

Laos: 25 years contract with China against loan. Chinese companies have taken the control of their national grid, exporting power and earning huge amount of money by grabbing even their market.

Montenegro: China lent 800 million dollars for construction of highway that is impossible to repay. The reason for this high funding is that the highway is a direct gateway to Europe.

China is laying many efforts to counter India by using Indian neighbors. Srilanka, Nepal, Pakistan, Maldives and Bangladesh, these countries are already in trap. We can very well comprehend about Pakistan as a natural ally of china.

Srilanka:Hambantota port is given on lease for 99 years to China against non-repayment of loan. In addition, 15000 acres of land given to Chinese companies. Definitely, it is a strategic location against India and it has commercial angle as well.

Pakistan: We cannot expect anything good from Pakistan. Pakistan is on the verge of collapsing socially and economically owing to its anti-India policies, supporting terrorism and religious extremism. They have become slaves of China. Slowly, China is taking control of their important locations, ports, resources and making them to follow orders.

Maldives: one more country under debt traps on the verge of collapsing to China’s brawny contract.

So, what India is doing to counter China’s misadventure and tactics?

Current central government is in no mood to bow down to the pressure tactics frolicked by China. Many initiatives have already been taken to counter China and strong mechanisms being developed in defense forces, trade, international diplomacy, technological advancements are on the cards.

The biggest international diplomacy is “QUAD” (Quadrilateral Security Dialogue). India, USA, Japan and Australia stalwartly joined hands together and this new way of diplomacy has taken china on a backseat. China will think 100 times before any misadventure; will lead to more damage to China economically and militarily.

Defense forces capabilities upgraded on the ground level with better infrastructure and facilities and at the same time technologically advanced arms and ammunition have been inducted and many more will be added in coming years.

The master stroke by PM Modi is declaring and initiating actions on Aatmanirbhar Bharat (Self Reliant India) in May 2020. This initiative has given a big push to government’s vision to achieve 5 trillion dollars economy by 2025, though it will be delayed owing to corona pandemic.

Why Atmanirbharat initiative is significant for India’s growth & how it will change the India’s position in global market?

Our import/export ratio with China is in favor of china in a big way. When India has pool of talent in every sector and big pool of youths unemployed. Still, we are giving out major business oppurtunities to china, which can be done in India with available knowledge, skills and technology. Incremental innovation is the key to compete china globally.

The reversal has begun with self-reliant India initiative. We are already seeing the effects of this initiative and will create a big impact on domestic market as well as global market in near future. We not only will be fulfilling domestic needs but will also capture global market in many sectors. We have already started snatching investmest/ companies from china and it will further increase as we evolve with ease of doing business, better infrastructure, skilled manpower in every sector, research and development, educational reforms.

• Electronic component and instrument manufacturing is on top agenda. The plan is to produce mobile phones of worth Rupees 10.5 lakh crore in coming 5 years. 65% will be exported.

• Manufacturing of integrated circuits (IC chips); first plant will be operational in 2 years.

• Toy industry and furniture industry is provided with necessary support. We will become net exporter in coming years. With the aim of promoting the toy industry of India, the country’s first national toy fair was digitally launched in February 2021.

• Few companies have already shifted from China or in the process of shifting to India. Though it is challenging we are making necessary changes in policies to make it a reality.

• The largest fund in the country worth ₹21,000 crore (US$2.9 billion) was setup by the IIT Alumni Council with the aim of supporting the mission towards self-reliance

• India’s own ‘Made in India’ 5G network was announced in July 2020 by Reliance Jio.

• India will be self-reliant in fertiliser production by 2023

• In August 2020, the Defence Minister Rajnath Singh announced that the Defence Ministry is “now ready for a big push to Atmanirbhar Bharat initiative” by imposing an “import embargo on 101 items” in a staged manner over a period of 5 years.

• The research, development and manufacture of COVID-19 vaccinations in India was connected to Atmanirbhar Bharat.

• As part of the Atmanirbhar Bharat package, numerous government decisions took place such as changing the definition of MSMEs, boosting scope for private participation in numerous sectors,increasing FDI in the defence sector; and the vision has found support in many sectors such as the solar manufacturers sector.

• “Brain drain to brain gain”, and had the aim of engaging India’s diaspora. To this effect, new organisations such as IN–SPACe will help in “preventing India’s Space talent Brain Drain”.

More” Make in India” commodities we purchase and promote, we are strengthening our country economically and globally. 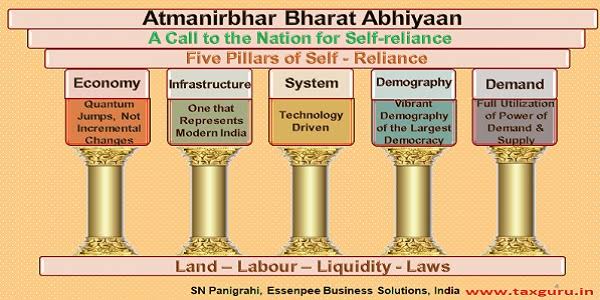 A Kashmiri can settle any where in India, buy property and do any kind of business but a Non-Kashmiri can not sell even ‘Gol-Gappas’ in Kashmir. Any one doing that is intimidated, harassed and finally killed
#Jahad #Kashmiriyat https://twitter.com/wangu_news18/status/1450107949993508864

A non local (Bihar resident) singing a Kashmiri song in his own style.

This is the essence of India, that some people envy, and target it by killing the innocent non-locals in the Valley

1st Pakistan spread jersey for #T20WorldCup with written “UAE”, though India is official host. But after “Dandaa” from ICC, PCB said no, it is fake jersey. Our jersey has “India” written on it.
Laaton ke Bhoot.
Ramiz had said that 🇵🇰financially depends on Indian money in cricket.

The (Honest) truth about (Dis-honest) Intellectual

How IT Industry is shaping the future of India?